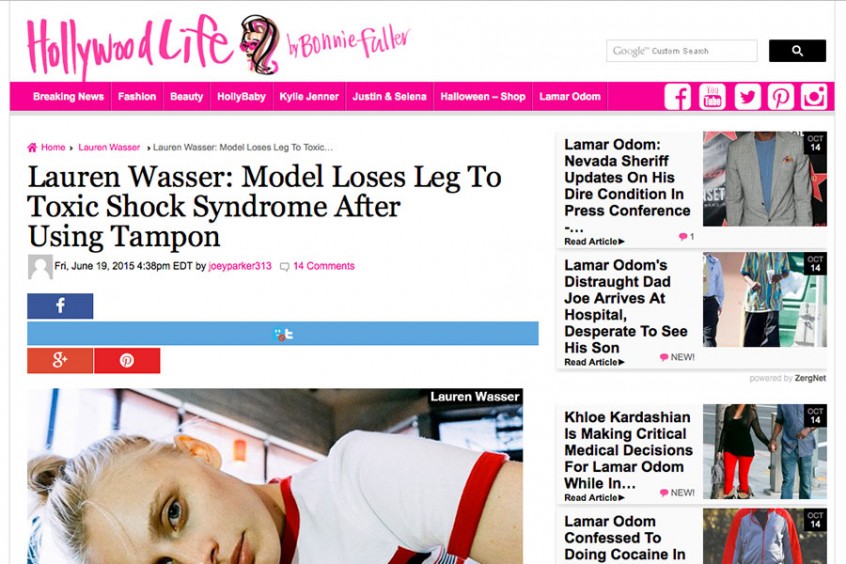 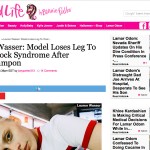 If you’ve ever bought a box of tampons you might remember seeing a little warning on the box about toxic shock syndrome (TSS). If you’re like most women, you probably read the warning once, but assumed that TSS won’t happen to you. After all, you change your tampon regularly so you’re not at risk, right?

That’s what model Lauren Wasser thought. She’s now suing Kimberly-Clark Corporation, the company that made the tampons she was using when she developed TSS, which resulted in the loss of half of her right leg and the toes on her left foot.

Three years ago, Lauren Wasser was on her period and replacing her tampons every few hours, as recommended by tampon box warnings and healthcare professionals. Then, she started to feel sick. A few days later, her friend found her passed out in her bathroom with a 107-degree fever. Lauren had suffered a heart attack and her internal organs were failing.

Lauren was rushed to a hospital. She later developed gangrene, as her tissues had died due to insufficient blood flow to her legs. The burning pain she experienced as a result was excruciating. Ultimately, doctors were forced to amputate the lower half of her right leg and the toes on her left foot. While Lauren has accepted her amputation, she still experiences pain in her left foot.

Today, Lauren is no longer using tampons and she’s suing Kimberly-Clark Corporation. She wants them to make tampons out of safer and more natural materials and to print clearer warnings about TSS, especially about the dangers of sleeping while wearing a tampon.

While reading about Lauren’s case is terrifying, it doesn’t mean that all women need to panic and toss out their tampons. The incidence of TSS is low, as only 1-2 out of every 100,000 women will get TSS from tampon use.

Only a small percentage of women can contract TSS due to tampon use because, in order to contract TSS this way, you must have Staphylococcus aureus in your vagina and lack the protein that protects you from the bacteria (this is more common in Caucasian women). You also have to keep a tampon in for longer than the recommended four to eight hours.

Even though the risk of developing TSS is low for most women, it’s important to take precautions to prevent it because its symptoms are so severe. Recommendations to prevent TSS include:

Change your tampon every four to eight hours, if not more. Leaving a tampon in for longer than that gives bacteria the opportunity to grow and potentially cause problems.

Use other types of feminine hygiene products like pads and menstrual cups. These products haven’t been associated with TSS, so they’re safer options.

Know the symptoms of TSS. The symptoms include muscle aches, high fever, dizziness, nausea, diarrhea, and rash. If you experience any of these symptoms while wearing a tampon, take it out and call your doctor.