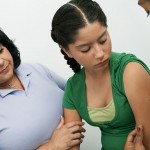 Would you give your child a vaccine that protects against a cancer-causing infection? Doctors have been asking parents this question since 2006, when the FDA approved Gardasil, the human papillomavirus (HPV) vaccine. While more parents have started saying, “yes” to the vaccine, many are still refusing it.

The ABCs of the HPV Vaccine

The FDA first approved Gardasil in 2006. Nine months later, the Centers for Disease Control and Prevention recommended that all girls receive the vaccine at age 11 or 12. In 2010, the CDC extended this recommendation to boys in the same age range.

The most recent version of Gardasil received FDA approval in 2014. The vaccine now protects against nine strains of HPV, a sexually transmitted infection that can lead to cancer. The new vaccine is an improvement on the original, which only protected against four strains.

The Numbers Are Up, But Not High Enough

The most recent estimates from the CDC show that more teens are receiving the HPV vaccine. The CDC estimates that 60 percent of teen girls and 42 percent of teen boys have received at least one dose of the three-course vaccine. This is the second year in a row that this number has increased. The CDC credits public health initiatives with the increase.

While the CDC is pleased with these gains, the numbers are still lower than the 80 percent adherence rate the CDC would like to see by 2020.

So, why aren’t more parents getting on board with a vaccine that’s proven to be safe and effective?

Some parents are concerned that vaccinating their pre-teens and teens against an STD might encourage promiscuity. However, studies have proven that the HPV vaccine doesn’t make teens any more likely to engage in sexual behaviors.

Other parents have expressed concerns about the safety and effectiveness of the vaccine. These worries should be put to rest, as almost a decade of data supports the efficacy and safety of the vaccine.

What Can States Do?

The way states have treated the HPV vaccine has been very different from their treatment of similar vaccines for hepatitis B and chicken pox.

In contrast, nine years after Gardasil was approved, only Virginia and DC require teens to receive the vaccine. Rhode Island will have a similar regulation in August. However, these requirements allow parents to opt out of vaccinating their teen if they don’t want to.

To reach the CDC’s desired adherence rate of 80 percent by 2020, more states should require teens to receive the HPV vaccine. As for the states that already do, they should revisit their regulations to prevent parents from opting out of the requirement if they don’t feel like vaccinating their teen.