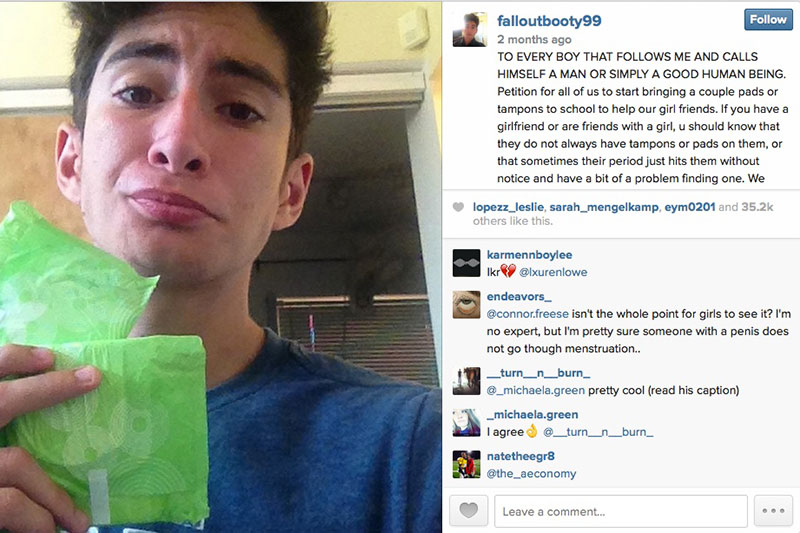 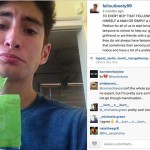 A few weeks ago while browsing my Facebook feed, I came across an article that was shared by Women You Should Know about Jose Garcia, a boy who decided to show support for his female peers by challenging his male classmates to join him in bringing pads and tampons to school. The call to action was announced on his Instagram page where he posted an image of himself holding two wrapped maxi-pads. A lengthy caption accompanied the photo, reaching out to “every boy…. who calls himself a man or simply is a good human being.”

He expressed his understanding of the inconvenience faced by women finding themselves without a tampon or pad at an inopportune moment, then having to ask for one discreetly. He let his female classmates know that they were free to ask him for one at any time, free of judgement or negativity in any form. He concluded the post with the hashtag #realmensupportwomen.

Garcia says he was inspired to draft the post not from one specific incident but from his daily interaction with women. He’d witnessed the period taboo firsthand, and not just in the inherent discomfort facing his female friends at having to ask a classmate for a feminine hygiene product. A friend once asked him for a sweater to tie around her waist when she discovered that she’d stained her pants while on her period. He observed how awkward she felt at having to ask him for the sweater and decided this was unreasonable. Not only should his friend not feel any embarrassment in approaching him with this simple and natural request, the stigma in general should be done away with once and for all.

The post went viral, of course, and you can probably guess what happened next. Many lauded his initiative as is evident in the 17,000 likes his original post received. Then came the train that’s unfortunately never late: the opposition, the hate, the barrage of ignorance and negativity. In his inner circle, his own male friends have poked fun at him for their belief that Garcia only went down this road in the pursuit of female attention. Other boys have gone so far as to throw slurs in his direction, calling him a homosexual behind his back.

Still, the resilient teenager stands behind his message and proudly calls himself a feminist. “I believe that there should be equality for everyone regardless of their sex, gender, skin color, race, religion, etc. so it would be nice to use this attention for something positive,” as he told the Daily Dot.

It warms the heart to see male figures stand up in support of women, doesn’t it? Especially in cases like this where support comes not in merely verbal form but in action: public, deliberate and unrelenting even in the face of criticism. Still, it also makes the skin crawl to witness the backlash that always seems to follow. Garcia is just a teenager and his message is one of positivity. It begs the question that so many of us are tired of asking- why is feminism the new F word? Why is the pursuit of equality met with so much hate?

It would appear that not enough of the world’s population has quite yet grasped that feminism is not a movement opposed to men, or even just one in support of women. Not even a Beyoncé song could clarify on a global enough scale that feminism is rooted in the desire for equality! Still, I give this brave teenager all the kudos in the world for doing his part to clear the fog and make a difference. I will always applaud the efforts of those who go out of their way to make a positive impact, one small step, maxi pad and hashtag at a time.

And yes, Jose: #realmensupportwomen, and what a real man you are. 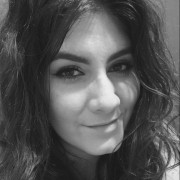 Vanessa Diaz was born and raised in San Diego, California and is a proud alumnus of the University of Southern California. After a decade working for the same company where she interned during her senior year, Vanessa recently left Corporate America behind to pursue her passion for writing. She is an avid reader, wine lover and seeker of beautiful libraries and independent bookstores. She considers herself a feminist and champion for positive female body image. Her blog Buenos Diaz is an expression of everything from her love of travel to her passion for storytelling, her interest in women’s issues and penchant towards humorous social commentary.