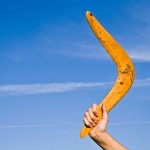 My Big Fat Fabulous Life TV show stars a 30-year-old woman named Whitney, who weighs 380 pounds, ostensibly because she has PCOS (polycystic ovarian syndrome) but also, as her trainer duly noted, a result of her overuse of a fork, knife and spoon. She lives with her 60-ish year old parents.

Her father is exceedingly involved in her life and decidedly critical of her and her choices while simultaneously indulging her every whim. The mother is, well, uh, something else. She seems daft but once in a while you see a glimmer of … something; I’m not sure what.

Whitney is a boomerang kid. I don’t know how long she lived independently but she’s back in the home roost.

This show demonstrates the textbook example of parenting an adult child and not doing it very well. That being said, an adult children shouldn’t require active parenting so there probably isn’t an ideal way to do it.

Whitney is absurdly spoiled, entitled and supremely confident when she’s not in the throes of agony about her weight. She gets quite indignant if required to do menial household tasks and is insistent upon boundaries as in dad can’t come into her room. Dad comes in anyway. Seems like the parents should be setting the boundaries, not the other way around.

One wonders if she pays rent. A good guess would be no.

I suspect in Whitney’s world her existence is her gift to her parents. I mean, who wouldn’t be delighted to have a 380 pound daughter, with issues, and very little income, camped out in the room of her youth?

The 30-year-old sponges off her enabling mom and dad, who both resent and delight in her. Of course, now she has her own TV show so maybe she can return the favor and shower them in dough and make their twilight years easy-peasy.

Done Parenting at 18?
No, parents are not done parenting when their child turns 18. Whoever thought that was true was delusional. Kids require guidance and support (and sometimes bail money) when they’re in college. Post-graduation is the danger zone. They cannot find a job or they’re underemployed and can’t afford to live independently. They want/need to come back home. Do you let them? However, when a kid hits 25, 30, aahh, isn’t it time to … well, you know, vamoose?

If you do allow them to return, what is the arrangement going to be? Is it going to harken back to days of yore when they were teenagers and, for the most part, careless, immature, irresponsible ingrates?

The Boomerangs (aka Whitney)
This is a slippery slope. Multi-generational living can ruin parent-child relationships for all eternity and it can be a strain on the parents’ relationship because mom and dad don’t always agree on this living arrangement. Dad: Kick his butt out! Mom: If he goes, I go!

Finances can be wrecked. Retirement delayed or foregone altogether.

If you have a snotty entitled daughter like Whitney, you are probably going to regret your decision to let her return. Oh, yes, she can be charming and her presence eliminates empty nest syndrome but, by golly, 60-year-old parents really should have something other and better to do than clean up after and monitor 30-year-old children.
Remember this: Adult children are NOT grandchildren. That’s an entirely different kettle of fish. Dissimilar rules apply.

Perma-Parents and Perma-Children
Some parents are inclined to be perma-parents while some adult children are predisposed to be perma-children: The perfect, terrible combination.

The kid comes home for good. While some boomerangers drop in temporarily when they’re down and out but quickly get back on their feet and hit the road, Jack, the perma-kid has no intention of leaving.

No one is complaining about the adult children who needs to pitch tent at your house for a while. Families stick together and help one another out but that doesn’t mean adult children are always going to be welcomed with open arms (He’s back, again???) especially when they’ve made a nasty habit of it.

This new generation of moochers behave as though they are 16 because, often, returning to home allows them to revert to an earlier stage of development, as in the teenage years (which we know you despised – what parent doesn’t?).

Whitney obnoxiously refers to her mom and dad as helicopter parents who hover, driving her crazy. But the deal is, if you move into your parents’ home, not your home, ma and pa are calling the shots. If they want to hover and interfere, well, that’s the price you pay, especially if you are paying no $price$ to live under their roof.

In Whitney’s case, as much as dad may annoyingly hover, and he does, she is reaping the benefits of being his kid and secreted in his home. Think MONEY. Greenbacks talk. There seems to be an endless supply and she doesn’t appear to be turning it down.

What’s Best?
Ideally, mom and dad live in their home and adult children live in their own homes with their own families. Multi-generational living is, however, more prevalent now than it has been since before World War II. Blame it on the economy, blame it on kids’ failure to thrive, blame it on whatever. It can work but it can also be disastrous.

Personally, this mother of grown children has no desire to be involved in the intricacies of my adult children’s lives. In fact, I very much enjoy them not being here. Yes, I love them, but, no, I don’t want them living with me full-time nor do they want me living with them but … the day may come. (Paybacks are hell.)

If they ask for advice, I very carefully and thoughtfully give it or don’t. I don’t offer unless asked. Sometimes I merely shrug and say I don’t know because I don’t. It’s their life not mine.

I don’t want them deciding stuff for me so why would I think they would want me doing likewise for them? In fact, as they got older and more independent the less I wanted to know because sometimes (Yikes!) a mother should be left in the dark. “Don’t tell me that! Who in their right mind tells their mother that?”

If you find yourself in a situation where an adult child needs to come back home for a spell (make sure it’s ‘just for a spell’) be smart about it. Write down the rules and requirements – who does what and when, who pays what – and sign off on it. Stick to it.

Treat your adult children like grown-ups, expecting them to behave as such. If you revert to mommying and daddying them, they may get so comfortable they never leave.

If everyone in the household is respectful of one another, it can work. How well it works depends on the players.